Every year for the past 10 year, Roy Yokelson’s opened up his home to host the unofficial-official VO-BBQ. It started 10 years ago with a small gathering of Roy’s voiceover friends. And if you know Roy Yokelson, he makes friends quite easily. 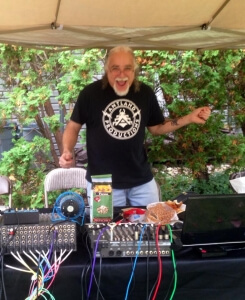 Roy had no idea I was coming to the New York Metro. Quite honestly neither did I, but the wind blew in and blew me with it and I’m so glad it did. It was my first VO BBQ. I had seen the pictures and videos from previous years and knew it was bound to full of fun and some of my favorite people. The annual gathering brought out some of the best in voiceover like Cliff Zellman, Peter Bishop, Jenn Ifer Platt, Mara Junot, Bob Souer, Scott Chambers, Jordan Reynolds, Andy Danish, Paul Strikwerda, George Whittam, Anne Ganguzza and that’s not even scratching the surface. Additionally Roy sells T-Shirts which he donates the proceeds from to children’s charities.

If you’ve enjoyed this videoand interview of Roy Yokelsons VO BBQ, please subscribe to this page for more. Also check out my blog and video with Rudy Gaskins entitled “Rudy Gaskins- The Right Guy For The Voice Arts Awards” as the 2nd Annual Voice Arts Awards are nearing in L.A. Click Here To Watch & Read
Dane Reid is a Voice Over Talent, Radio Commercial Producer and Imager, Voice Over Youtube Channel Producer at http://Youtube.com/DaneReidMedia , Children’s Book Author, Entrepenuer & And Avid Global Traveler

As I look down on Victoria Harbor here in Hong Kong, I reflect on my journey here. Mine is a literal and a figurative journey. Voiceover was never in the cards for me as far as I was concerned but growing up I dreamed of a world that extended far beyond the brick apartment building across the street from my childhood home. It was a world where anything was possible and it was a world far away. Growing up in NYC you hear a lot of voices. They are voices from all over America and all of the world. Those voices come with multitudes of accents, come in various languages and reflect an array of stories from around the globe…… Read More


When you work hard, you should play hard. But this playground was 22 hours awayfrom my doorstep. Thailand! A place I loved so much I had to visit twice in 7 months.

Thailand is an alluring place. I met an ex US soldier in Tokyo who said to me that he had been all over the world but Thailand was his favorite place. So much so that he had moved there. And I see why.

My tour guide to this constitutional monarchy was Jackie, a beautiful 32 year old woman who I met hanging out with some friends. Jackie was from Chang Mai, and is the daughter of a Thai mother who passed and an African American US Army father who she had never known. We had great conversations where she shared what Thai life was like. She also surprisingly knew a lot about US culture with great accuracy. She agreed she would pick me up from my hotel room and take me around Pattaya to find voice over work.

I did a lot of research about voice over in Thailand before I started knocking on doors. Many of the doors were closed and one was even slammed in my face but I found a be gentleman who ran a
local tv and radio station who spoke to me. I talked to him for quite a while and kept in touch but found that the rates for doing voiceover, at least in Pattaya Beach were quite low.

On my next trip I some more networking but this time in Bangkok. But Bangkok is also a big city with lots of tourist attractions that I took full as anywhere of. From the Kings Palace to the river ride to the market, I really took it in.

From there it was of to Phukett in the south of Thailand. Phukett is a beautiful pace far from the hustle and bustle of the capital, Bangkok. It’s relaxing and the water and landscape are breathtaking. Phukett is famous for being one of the places in Thailand where the the tsunami hit and over 10,000 died or went missing. Now there is a clearer evacuation plan and early warning systems in place to help residents and tourist survive possible devastation.

From Phukett back to Pattya beach where I ran into that ex US soldier by coincidence.

We hung out for a few days and he really explained more in detail why he loved this place. It was also in Pattya when I started checking my email and realized that i had missed a few voiceovers and auditions. But I was prepared.

In anticipation of doing actual voice over in Thailand I brought my Harlan Hogan potabooth to see if the old thing still had it. It still had it. And i still had to squeeze work in to playtime. I guess as a working voice actor there is no such thing as a real vacation. But Thailand is one hell of a workplace.